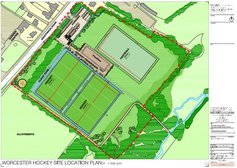 Worcester Hockey Club (WHC) is one of the country’s oldest clubs, having been founded in 1892; but has been largely nomadic for many years; playing hockey and socialising at several different locations, and with no permanent base. For more information about the club’s history please see club history page

In 2012 we initiated a project to secure our own ground; and after huge amounts of hard work on 20th February 2020 we finally achieved planning permission to build two pitches and a pavilion. The new Worcester International Hockey Centre is a joint venture between WHC, the Royal Grammar School Worcester (RGS) and Worcester City Council, and as such will be for use by WHC, RGS and the external community generally.

The hockey centre will be built on land adjacent to a grass football pitch, on the site of the Royal Porcelain Recreation Ground, Droitwich Road, Worcester, WR3 7SW

The Hockey Centre
The grounds will consist of two state of the art, international standard, water based astroturf pitches (EH Category 1 pitches for national and international competition, each measuring 55m x 91.4m with 4m run off), a pavilion, and on site car parking. The pitches will be flood lit in line with FIH standards to a level of 500 Lux. There will be six flood light masts per pitch to prevent glare and avoid disturbing shadows for the goal-keeper.
The pavilion facilities include 8 changing rooms, officials changing rooms, club room with kitchen, reception and meet and greet area, and are a modular design such that a club house can be built at a future date. Restrictions brought about by COVID legislation has delayed the start date of the project but we hope to begin work in September and aim to compete the pitches by April 2021

Community use
In addition to being used by WHC and RGS, the centre will be available for use by local schools, the University of Worcester, other higher education establishments, other clubs, community groups, national and international teams